Wetterlings is an axe forge in Storvik in the middle of Sweden. We have been on the premises, making tools, since over a hundred years. Thera are about 14 people forging axes and tools as well as shafting axes. 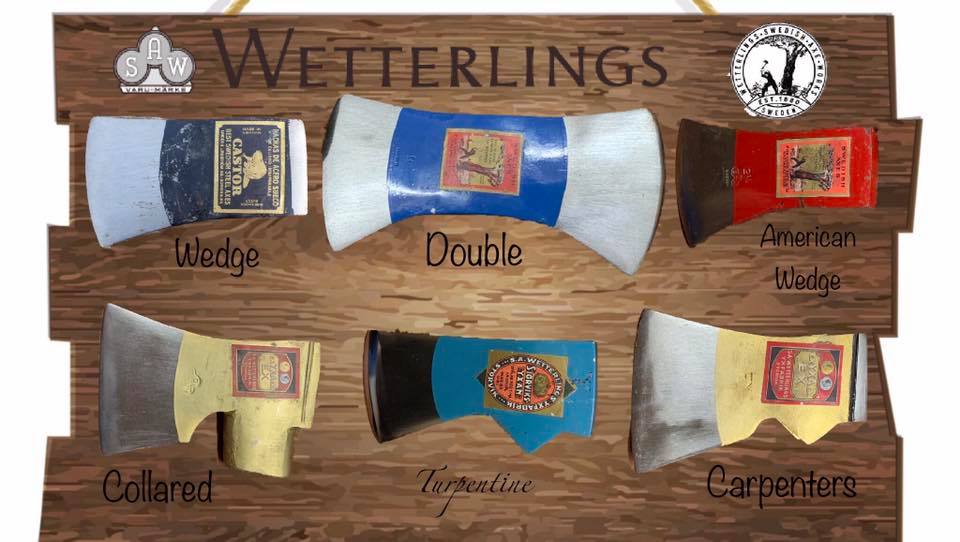 Wetterling philosophy: You cannot really own antique axe forges – they belong to the common industrial history – but you can take on the responsibility for preserving them and for transferring the knowledge created by previous generations. Hopefully it will survive its keepers.

Wetterling is probably the oldest, still producing, traditional axe manufacturer in the world.

There have been some twenty axe forges in Sweden, most of these started around 1900. Today, there are few left. 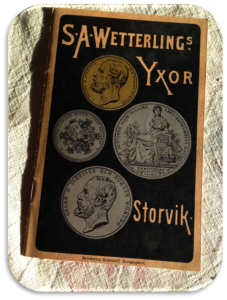 1880, Sven Axel Wetterling started manufacturing axes, broad-axes and bark shovels for the then-thriving forest industry. At first he was situated in Bäckefors Mill in Dalsland. 1882 Sven Axel’s brother, engineer Otto Wetterling, came home from America where he had spent several years studying industrial axe manufacturing. Otto was very technically talented, was appointed foreman and immediately took responsibility for the production and development of the company.

As a historical curiosity may be noted that Wetterling’s axe forge in Bäckefors was one of the first companies in Sweden making hatchets in larger series.

1885 Wetterling’s moved the business to Storvik – a small town with an important railway for the transport and handling of raw materials. Also, the proximity to the iron and steel was an advantage. Hydropower in Vallbyån was obviously a necessary resource. Six households, the Wetterling brothers, the blacksmiths Hane, Ljung and Lundström and the grinder Petterson, moved to Storvik.

Wetterling’s expanded and modernized. Already 1889 the two old water wheels were replaced. But still forging was very simple – a blacksmith was busy forging 20 – 30 axes per day. If you make the assumption that the three blacksmiths forged 25 axes per day for 265 days, it was still an annual production of 20 000 axes.

Otto Wetterling died in 1915. Sven Axel was old and tired and not as technically competent to manage an axe forge as his brother. He contacted merchant Magnus Lilieblad from Stockholm and offered him to buy the axe forge in Storvik. It may be noted that Wetterling and Liljeblad were personal acquaintances and good friends even if they have previously been competitors and   Liljeblad rightly regarded the older Wetterling as a doyen in the axe business.

Sven Axel Wetterling sold the axe forge 1917, to Lilieblad, who in 1919 settled in Storvik. Now a new modernization began. The machinery was updated and he acquired an Arboga forging press hammer, which replaced the old spring hammers. This hammer was still used in 2014!

Other important changes was the rebuilding of the grinding process and the transition from rough grinding with large sand stones that must be used in water – which was very unhealthy for the workers – to grinding without water, with emery cloth, and installing fans.

1921, Lilieblad fetched his young nephew Gustav Johansson (who later changed his name to Jungefors ) from Småland to Storvik, where he learned all about axe manufacturing and sales. 1927 Liljeblad moved to Uppsala and Gustav became the manager at the axe forge in Storvik .

1933 the business employed 16 workers, foremen, office and warehouse staff. The production was up at 108 000 axes, broad-axes and shovels bark per year. During the war, probably about 40 people was working in the business.

1950, Gustav Jungefors purchased the company. The fifties were good times for the axe manufacturers, as logging and burning wood was extensive globally. The company exports increased and as far away countries as Argentina and Brazil became important markets.

The business expanded as Söderhamns Shaft Factory was purchased and moved to Storvik. Handle production has since been of great importance for the business. (Besides Wetterling’s, there is only one manufacturer of handles in Sweden , Smedberg’s in Rydaholm.) The handle is an important part of an axe – and good handles are difficult to manufacture.

1968, Gustav’s son, Ingvar Jungefors, began working in the company. Ingvar had worked in the family business before beginning his technical education, like his younger brother, Åke. Ingvar took part in dismantling one of Säter’s four Arboga forging presses and then mounting it in Storvik where it is still found and used.

A new handle factory was built in 1971 right next to the axe forge. During the 1960’s and early 1970’s, it was still good times for axe manufacturing and Wetterling’s had good relations with neighboring Sandvik AB, which for many years was a large and important customer. At the top year 1974 Sandvik AB bought some 50 000 axes of the approximately 160 000 axes produced.

The Jungefors brothers took over the ownership of Wetterling’s from their father; Ingvar was the majority shareholder and CEO. In the 1970’s, however, increasingly tough times started. Technological developments in forestry – first the chainsaws and later large forest machines – had made the axe entirely superfluous in perhaps the biggest customer group: the forestry workers. In Sweden alone there were about 350 000 forestry workers in the early 1960’s, and, although many only worked part of the year in the woods, they consumed large amounts of axes . The 20 axe manufacturers existing in Sweden in the early 1900’s , 70 years later were reduced to three. Säters Yxfabrik was last to close, abandoned in 1966.

The remaining forges worked pretty well for a while, sharing clients from Säters Yxfabrik, and benefiting from a temporary rise during the 1970’s oil crisis. The total market for axes fell dramatically. Axe manufacturers tried to survive by lowering the price of the axes – often, unfortunately, at the expense of quality – in order to be able to make business in an increasingly competitive market under price pressure. Profitability was low for all axe manufacturers, not only in Sweden. Many of the world’s axe manufacturers were liquidated. In the U.S., for example, it existed about 600 axe manufacturers around 1900. 2014, there remained only a few.

The competition from China was already noticed in the 70’s. Wetterling’s large customer Sandvik AB began buying their axes from China, which of course was a major setback for the axe forge in Storvik .

Ingvar’s son Lars Jungefors began working at Wetterling’s yxsmedja 1999, alongside his father, and soon became president and head of finance and production. Ingvar’s interest was now focused on the handle production and another machine for turning handles was commissioned in 2007. Wetterling’s met declining sales by broadening the production and started manufacturing forestry tools. Huskvarna became a major customer of these. But history repeated itself. Countries with competitive pricing almost completely took over also that range of products. Remaining is, however, the original axe manufacturing, where the axes are forged largely as in 1919, in the old, steady Arboga forging presses. Most of the heating today takes is done by induction heating – from cold steel to forging hot 1,200 degrees in a few minutes – and much of the backbreaking grinding has been completely eliminated.

In 2007, Gabriel Brånby, who, from 1985 to 2009, owned and managed Gränsfors Bruks AB, purchased Wetterling’s axe forge. He sold the latter in 2009 to Adam and Daniel Brånby, two of his four children. During the period 2009-2013, Julia Kalthoff has been responsible and CEO at Wetterling’s. She has after this period a leave of absence for university study. The business owner is the CEO.

9 people currently work at Wetterling’s. In a way, Wetterling’s has taken a step back, and now the old knowledge and forging craftsmanship are the important assets of the company. Unnecessary chemicals have been banned and paints are becoming increasingly rare. The forged, unpainted axe has become a statement of the craftsman’s skill – a skill that increasingly more customers learn to appreciate and are willing to pay a little extra for.

The business is based on the following maxim: “You can not really own an antique axe forge – it belongs to our joint industrial history – but one can assume a responsibility. A responsability to nurture and pass the knowledge previous generations have created, and that hopefully will outlive its keeper, on to the future.” What unites the company’s employees is an interest in axe manufacturing and axe culture. Axe manufacturing, a piece of Swedish industrial history, is still alive and spreading its products throughout the world.

We accept PayPal as payment. Transactions are performed via a SSL server to ensure your privacy.